Intercultural | What you should know before negotiating in France 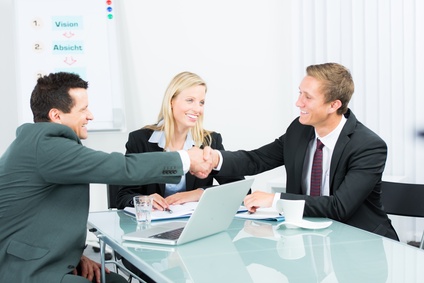 Negotiate with french people has some particularities. This article is not an exhaustive guide, but it want to give some tips to help you to approach business relationships with our neighbours.

Most businesspeople in France read English, so there is no need to have your business card translated into French. But if you do have your card printed in French, it should indicate your position in French and your university degree, if it is at the Ph.D. level.

It's strongly recommended that you learn basic French phrases and use them whenever possible. Your efforts will be well appreciated and remembered. The French will revert to English if they see you make an effort.

When you speak their language, be gracious if the French correct your mistakes in grammar or pronunciation.

Usually, people who make these efforts care about the French language and are only trying to help you speak it effectively.

The French tend to focus on long term objectives and will try to establish firm personal relationships with the other negotiating party.

During a first meeting, remain polite and cordial, but keep in mind that the French tend to be suspicious of early friendliness.

The French can be very direct, questioning, so a carefully planned, logically organized proposal is very important. Moreover, it is likely that the French side will focus on the aspects of your proposal that require further explanation. You may find that the French tend to treat the business discussion as an intellectual exercise.

Logic will dominate arguments on the French side. Moreover, they will be quick to criticize anything illogical stated by the opposition.

Although the French can often be persuaded to change their opinions, they will not accept anything that deviates from the cultural norm. They are, however, receptive to any new information that enhances the spirit of debate.

The French will judge you on your ability to demonstrate your intellect, and this often involves discussing ideas and engaging in rigorous debate with them. You will earn their respect if you can handle yourself well in these situations. Don't be too concerned if your opinions differ from those of your opponents; what matters is your ability to effectively defend your position, demonstrate that you are well-informed, and maintain your composure.

Discussions are likely to get far more heated and intense than you may be accustomed to in North America.

In the middle of an argument, the focus may change, setting aside the immediate issue. Try not to be frustrated; these are characteristic of French business culture.

Despite the passionate tone of business discussions, don't make the mistake of insisting that everyone agree with your opinion or attempt the "hard sell."

Avoid from discussing your family or other personal matters during negotiations.

The French tend to be preoccupied with examining every minute detail before arriving at a decision. Consequently, be prepared for a long wait before you receive an answer.

If the negotiations reach an impasse, the French will politely keep restating their position.

Power is intrinsic to French business culture; only the highest individual in authority makes the final decision. Therefore, be aware that the people with whom you are dealing are probably only intermediaries.

It's possible that the members of the French negotiating team will be of the same university (Grande Ecole).

Despite the intensely hierarchical structure of this society, working successfully with all levels of the organisation is still crucial to your success.

The French workplace is highly organised and structured.

Finding a way around rules and regulations, when they fail to work, is an accepted practice, and this can be accomplished if you have an influential contact. The rules generally work in the best interests of those in very privileged positions in the French business.

Women may be treated with special respect by men, both in business and social situations, and this is meant to be perceived as an honour.

French women still face considerable problems in achieving positions and levels of income that are comparable with men. In France, most people with significant careers in business are products of the exclusive grandes Ecoles, and the majority of graduates from these institutions are men.

This website uses cookies to improve your experience while you navigate through the website. Out of these, the cookies that are categorized as necessary are stored on your browser as they are essential for the working of basic functionalities of the website. We also use third-party cookies that help us analyze and understand how you use this website. These cookies will be stored in your browser only with your consent. You also have the option to opt-out of these cookies. But opting out of some of these cookies may affect your browsing experience.
Necessary Always Enabled

Any cookies that may not be particularly necessary for the website to function and is used specifically to collect user personal data via analytics, ads, other embedded contents are termed as non-necessary cookies. It is mandatory to procure user consent prior to running these cookies on your website.