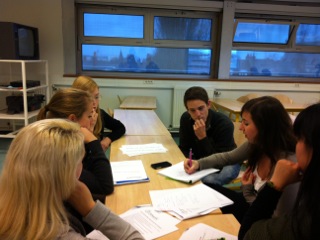 During three days, from Tuesday the 22nd to Thursday the 24th April 2014, third year Bachelor at the IGR (Institut de Gestion de Rennes) had a class untitled  “Intercultural Management”.   This class was presented by Arlette Janssens, our Trainer.

The 32 students were immersed during 3 full days in the intercultural environment. We were sitting in a u-form to facilitate the communication between us.

With the globalization, students need to understand and be understood, despite their cultural differences.

In this class, students were able to work in workshops. The introduction of the training was quite interesting. The students used a flower to describe their common points, and to say what makes them unique.

During this workshop everyone was free to interrupt the teacher at any time.

We compared the cultural differences between France and a country we’ve been travelling in (England, Italy, China…). 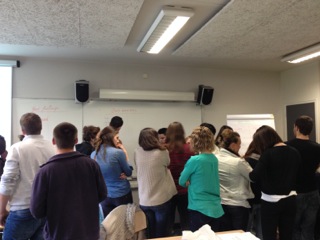 We learned to describe a problem without any judgment, but through the expression of our feelings and needs, in order to express clearly our request.

Finally, Thursday, we participated to a last interactive workshop. The students were divided into 3 groups: one group represented a fictive country with an Anglo-Saxon culture, which sold gold to another group who came from a fictive country with an Asian culture. The last group was composed of students who had to discover the different cultural codes of each country.

These workshops were aimed to demonstrate to the students that globalization created the meeting of cultures. But some simple tricks can facilitate the communication between people who have extremely different culture. Try to know the person, his culture and his way of living, be open-minded.

Students were very satisfied of this class. They left this class really enriched, both on the professional and personal side. They really enjoyed exchanging in English and the Anglo-Saxon approach of teaching was very much appreciated. It changes from their regular class where they have to write down what the professor says, this class was more interactive.

Master of Marketing and Sales

This website uses cookies to improve your experience while you navigate through the website. Out of these, the cookies that are categorized as necessary are stored on your browser as they are essential for the working of basic functionalities of the website. We also use third-party cookies that help us analyze and understand how you use this website. These cookies will be stored in your browser only with your consent. You also have the option to opt-out of these cookies. But opting out of some of these cookies may affect your browsing experience.
Necessary Always Enabled
Necessary cookies are absolutely essential for the website to function properly. This category only includes cookies that ensures basic functionalities and security features of the website. These cookies do not store any personal information.
Non-necessary
Any cookies that may not be particularly necessary for the website to function and is used specifically to collect user personal data via analytics, ads, other embedded contents are termed as non-necessary cookies. It is mandatory to procure user consent prior to running these cookies on your website.
SAVE & ACCEPT